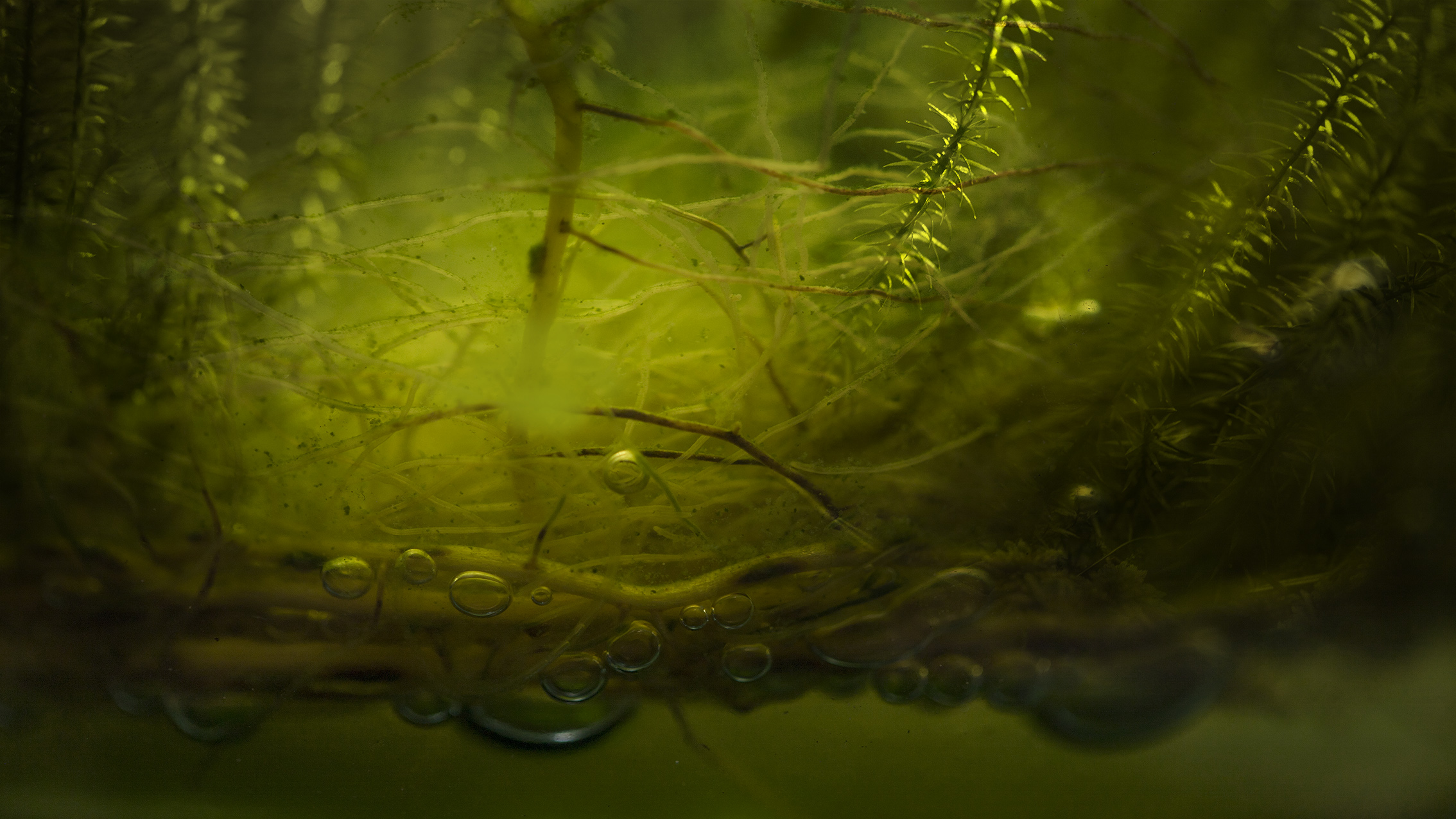 Timothy Morton is a radical, playful and unpredictable philosopher. His ideas on the environment, art, climate change and ecology are hot, dynamic and astonishing. They bravely consider the end of the world, which should be welcomed with open arms, instead of fear. But not by way of destruction of the biosphere, apocalypse or general degeneration, but as a recently eclosed biotopia, where humans are on the same plane with all the other life forms on the planet.

Just like Biotoopia, Timothy Morton is not your average anthropocentric-world-view cup of lukewarm tea. The Anthropocene as the era of human influence has made us encounter problems in every corner of the world, which cannot be solved by traditional experience any longer. All searches for the new must remain outside current traditions. Here Morton proposes an alternative perception of the environment – ecological awareness – that starts with depressive anxiety and flows into a strangely sweet realisation that to fight to prevent the ecological catastrophe, we must fight against ourselves.

[–] It is in the disappearance of the world that Morton sees the possibility for new ontology and new ethics. ‘What is left if we aren’t the world? Intimacy. We have lost the world but gained a soul – the entities that coexist with us obtrude on our awareness with greater and greater urgency. Three cheers for the so-called end of the world, then, since this moment is the beginning of history, the end of the human dream that reality is significant for them alone. We now have the prospect of forging new alliances between humans and non-humans alike, now that we have stepped out of the cocoon of the world.’ Thus, according to Morton, to transcend anthropocentrism we must debase humans: ecological thinking should pull the rug from under humans, so that they could stand on earth again.

Morton is a living example of an interdisciplinary trickster – a literary scholar and philosopher, who – besides being one of the most respected authorities on the poetry and prose of Percy Bysshe and Mary Shelly – has in his studies also dealt with the ideological aspects of gastronomy and taste. His ecological philosophy has been radical and highly cited, and his discourse on environmental aesthetics is masterful. He has contributed significantly to discussions on object-oriented ontology at the start of the 21st century.

Estonian readers have been introduced to the most essential aspects of Morton’s realm by the thinker and poet Hasso Krull, whose essays delve deeply into the potential furrows for the future of Estonians and Estonian culture. Similarly to Morton, Krull is looking for a possible next step in the ecocide we are witnessing right before our eyes, where the mindless destruction of natural environments would be replaced by fundamental solidarity with other, non-human life forms. Hasso Krull has explored Timothy Morton’s ideas in such essays as “Varsti” (Soon), “Holokaust Eesti moodi” (Estonian Holocaust) and “Imelihtne tulevik” (Very Simple Future) (essays are in Estonian).

Estonia’s future is dark. But the present is even darker, because the worst is being prepared right now, people are hard at work at it. Of course it creates restlessness and anxiety, but anxiety might not be bad: it could be the key to the way out. As Timothy Morton writes, ‘The basic mode of ecological awareness is anxiety, the feeling that things have lost their seemingly original significance, the feeling that something creepy is happening, close to home. Through anxiety reason itself begins to glimpse what indigenous – that is, pre-agricultural – societies have known all along: that humans coexist with a host of nonhumans. For reason itself reveals itself to be at least a little bit nonhuman.’ Recognising this important fact leads us into dark nihilism, which in turn shows us the way into dark ecology.

The more prominent aspects of Morton’s territory for your mental googling besides dark ecology and nihilism, are terms like hyperobject, anthropocentrism, non-humans, ecological awareness and ecological thinking, ecology without nature, coexistence, OOO. Morton’s works are always illustrated by examples from contemporary art, pop culture, sci-fi films and unexpected exoticism, which makes his writing grippingly multi-layered and enthrals the reader frequently with surprises, weird parallels and strange stories. The philosopher has collaborated extensively with artists, such as Björk, Lauri Andersson, Olafur Eliasson, etc.

Timothy Morton achieved wider recognition with his book Ecology Without Nature, after which his thinking and respective research may be divided into three closely interlinked, mutually influential clusters.

I. Rethinking environmental aesthetics and abandoning the concept of Nature.

For Morton, one of the main stumbling blocks in environmental thinking is the image and concept of nature itself, which over centuries has helped in the human mental sphere to develop an illusion of opposition and detachment between the biosphere and human civilisation. Admiring nature from a distance causes similar paradoxical mental confusion to the one that patriarchy perpetrates on the woman: it raises her on a pedestal of sadistic admiration, while simultaneously subjecting and destroying her. Morton propounds a paradox which guides his thinking to this day: for a truly ecological view, thinking or awareness, we must completely let go of the concept of nature. This is the prerequisite to understanding climate change and the Sixth Mass Extinction Event, to perceiving it, living in it and directing it towards more positive routes. The main works of this cluster are Ecology Without Nature, The Ecological Thought.

II. Object-Oriented Ontology, hyperobjects and a fundamental rejection of anthropocentrism

The initialism OOO, for object-oriented ontology, combines one of the more radical movements in 21st century philosophy, which postulates that objects exist independent of human perception and are not ontologically limited by their relationships with humans or other objects. One of the main principles of OOO is the renouncement of anthropocentrism – to restore the independence and inexhaustible existence of all non-human entities, in a way that the existence of objects is no longer inseparable from the human mind or its relationships with objects. Timothy Morton’s contribution to OOO is connecting it with ecology, environmental ethics and contemporary art, whose perhaps most famous ‘discovery’ is the term hyperobject. Objects that are so widely dispersed in time and space that their perceptible measurements dissolve and cannot be affixed in time and space, one-dimensionally represented or clearly defined. Morton gives examples such as climate change, nuclear waste, styrofoam.

Main works in this cluster are Realist Magic: Objects, Ontology, Causality; Hyperobjects: Philosophy and Ecology after the End of the World.

III. Coexistence and solidarity with other life forms

Science and technology have issued many challenges to lines that have been drawn between life and non-life, organic and inorganic, human and non-human. The anthropocentric world view where the measure of objects and life forms resides inside the human brain, is gradually being replaced by a realisation that those lines are blurred and instead of the human-faced measuring tape we have a single-sided loop akin to a Möbius strip. The ecological awareness that begins with a depressive anxiety and flows into a sweet realisation that in our fight to prevent ecological catastrophe, we must fight against ourselves. There’s a need for a conceptual change in the human world view which raises humans to the same plateau with non-humans and stops looking for absolute knowledge, language, power.

We humans contain non-human symbionts as part of the way in which we are human; we couldn’t live without them. We are not human all the way through. We and all other lifeforms exist in an ambiguous space between rigid categories.

Main works in this cluster are Dark Ecology for a Logic of Future Coexistence; Humankind: Solidarity with Non-Human People; Being Ecological.

The best introduction to Timothy Morton’s engaging, knowingly eclectic and meandering thought processes is to listen to himself, of course:

Realizing that there are lots of different temporality formats is basically what ecological awareness is. It’s equivalent to acknowledging in a deep way the existence of beings that aren’t you, with whom you coexist. Once you’ve done that, you can’t un-acknowledge it. There’s no going back.