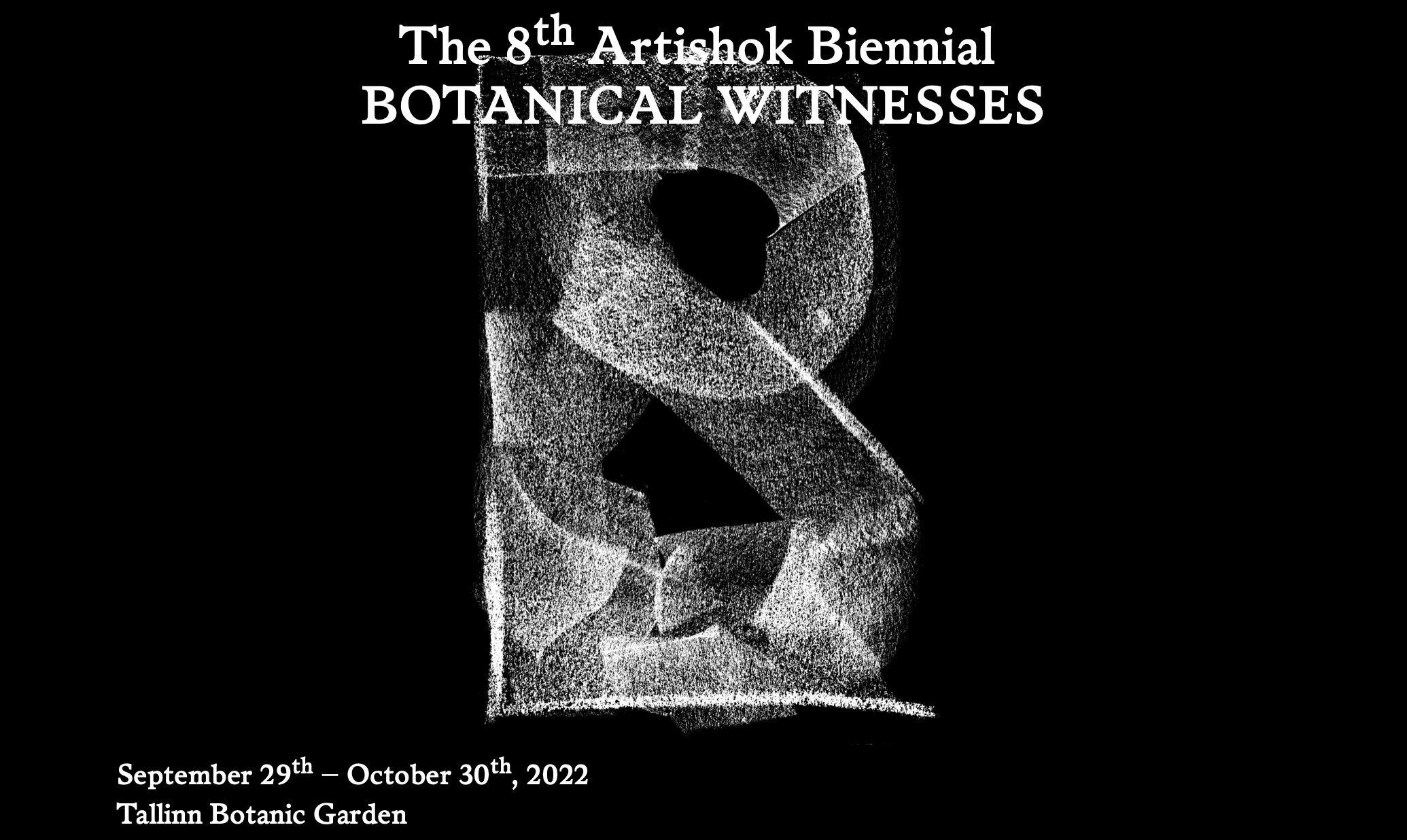 The 8th Artishok Biennial Botanical Witnesses will take place from September 29th to October 30th, 2022. The subject matter of this event, dedicated to contemporary art, has been inspired by this year’s location, Tallinn Botanic Garden. While bringing together artists and writers from the fields of visual art, performing arts and architecture, the botanical garden will become a common platform of learning and unlearning during the biennial period.

According to Ann Mirjam Vaikla, the curator of the 8th Artishok Biennial, the title Botanical Witnesses refers to the scientifically proven possibility that plants have consciousness that is extending much further from the boundaries of human perception. As human beings, we are used to relate to plants either as a commodity or beauty. The biennial as a seedbed for site-specific works of art attributes botanical individuals certain agency so that the latter become witnesses for the surrounding processes.

„Whereas every garden is artificial, made and controlled by man, then the botanic garden can be clearly defined also by its political dimension. The phenomenon of botanic gardens was founded during the era of colonialism in Europe when expeditions for finding valuable and rare spices and medicinal herbs had a significant role. Tallinn Botanic Garden has certainly other narratives important from the perspective of decolonization – the garden was established with the Institute of Estonian Academy of Sciences during the Soviet time and in order to form its botanical collections, more than 50 expeditions were held from Crimea to the Kuril Islands,“ adds Vaikla.

ARTISHOK BIENNIAL is a unique exhibition format in Estonia, which brings together ten artists and ten writers in different locations each time. During the ten-day-long opening marathon, ten artists present their new artworks and each of the works in production will be paired with ten critical writings to be published for the marathon. The artworks form a group exhibition complemented by the related writings – this offering one hundred ways for interpreting the artworks.

First held in 2008, Artishok Biennial is an experimental collective that together with the format of the biennial hands down its experience and knowledge to next generations. The curators of every following biennale preselect the next curators as a result of mutual discussion. The former curators of the biennial are: Maarin Ektermann and Margus Tamm, Kati Ilves, Liisa Kaljula, Indrek Grigor and Šelda Pukite, Evelyn Raudsepp, Sten Ojavee, Laura Linsi and Roland Reemaa. The biennial has taken place in the following locations: Tallinn City Gallery, Tartu Art House, Contemporary Art Museum of Estonia, the Mūkusala Art Salon in Riga, Theatre NO99, former waiting pavilion at the Baltic Station, public space of Tallinn and Kai Art Center.

Artists of the 8th Artishok Biennial:

is a poet, critic, animal-lover, body-alchemist, choreographer and a dancer from Estonia. At the moment she is mainly interested in the more-than-human world, working in collectives and collectively, and slow (not busy!) with investigating relations between eco-somatics, medium-mystic agency and plant-thinking.

is an Australian-Estonian artist who works in a variety of media. He obtained a Bachelor’s degree in installation and sculpture and a Master’s degree in contemporary art at the Estonian Academy of Arts. Recently, he has been interested in how we think about loss, longing and extinction in the natural world.

is an artist and writer born in Zhdanovka, Donetsk region, USSR and based in Muzychi, Ukraine, 26 kilometers from the city capital of Kyiv. Having grown up in the Donetsk region of Ukraine, known for coal mining, she has experienced Ukraine’s abrupt and chaotic changes from the days of the USSR to the imbalanced environment after, including undeclared war between Russia and Ukraine that is going on today.

is an artist and designer from Estonia. She holds a BA degree in Graphic Design and a MA in Fashion Design both obtained at the Estonian Academy of Arts. She works with surplus compostable materials and also co-runs an open garden near Narva Art Residency (NART).

is an artist mainly working with photography and 16-mm film through the form of spatial installations. Since 2013, the artist’s interest towards modernist forms has been present in his artwork. His recent works focus rather on material (steel and glass) and its connection to the development of modern capitalism since the mid-19th century than the form of modern architecture.

is an Estonian artist living in the Netherlands. She works together with more-than-human bodies and imagination, attempting to encounter the almost imperceptible – whether it be too slow, too small, too far. Collaborative practices with microbial organisms, trees and human-made objects have grown into participatory experiences, video works, performative and written pieces.

is an Estonian performance maker. Her artistic work and research focuses on societal coexistence from the perspective of an individual, in which compressed space is an essential poetic component. She has recently obtained a MA degree in contemporary performing arts (CPPM) at the Estonian Academy of Music and Theatre and practices as a freelance artist.

is a visual artist and filmmaker who’s practice responds to contemporary politics and the interconnectedness of production and reproduction of popular everyday material. Her works often draw upon existing knowledges to address movement, identity and queries related to the gendered body and its relationship with the public sphere.

create collaborative interactive work by collecting data from the environment and translating it into a human-size physical experience. Urmo Vaikla is an interior architect interested in human-space relationships. Mikk Meelak is an architect who is involved in the integration of physical and digital space by focusing on realtime data and dynamic user-generated content.

are architects whose practice involves organising various events and projects, exhibitions and summer schools. They value activities, such as tinkering, fixing, cleaning, building and demolishing – or any other handy scale of spatial creation. Focusing on the already existing and using the materials at hand.