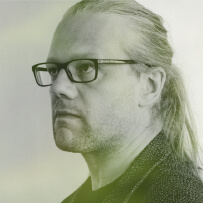 There is a problem with well-being. It seems natural to try to raise wellbeing both individually and collectively. We want to express our power of existence in as many ways as possible. Yet, if material resources are considered, returns from them tend to diminish: while there is a good initial correlation between material resources and the subjective happiness of an individual or a society, this correlation tends to dampen. A wealthy society has to expend much more than a poor society in order to raise the perceived subjective well-being of its citizens by a certain percentage point; and individually the correlation tends to disappear, in Western societies, at a yearly income of around hundred thousand euros. But the drive to continue to raise material well-being tends to stay, becoming an aim in itself or in other words, it becomes meaningless. Or rather, taking into consideration the ecological crisis, it becomes outright deleterious. We cannot go on producing and consuming material resources the way we do right now, lest we destroy important conditions of our existence.

Perhaps we can redirect our focus (both individually and collectively) to immaterial or cultural production? So that we would invest less in highways and more in symphony orchestras? Instead of buying a new car, I go to an exhibition or hiking in order to acquire experiences that do not require much material resources? While there indeed has been a trend to shift the evaluation of societies away from GDP and to include other parameters (health, education, environment, etc.); and individually, younger generation may be less materialistic. But the same problem remains: why? What sense is there to multiply those immaterial (cultural, experiential) phenomena? Where to end? The possibility of “more” may still produce anguish.

A possible solution is when we understand that being itself is good. We may indeed want to try to make (individually and collectively) our being better, but we do this already inside existence itself. Our being is the prerequisite of any amelioration. And this being is without measure or comparison. The being that is good is hence the best being – however good or bad we are at the moment, the very fact that we are, is good, is the best.

Of course, at the same time we also exist in a comparative way, both in our own duration and in relation to other beings, and we want to make our being comparatively better. So, a more comprehensive understanding of life includes both the fact that being is good and that inside that incomparable goodness we can make it better or worse. The sense of making being better comes from the fact that it is, paradoxically, already good and the best. This attitude may also diminish the compulsivity of “making better”, and hence also to reduce the unsustainable growth drive.

Margus Ott (1975) got his PhD in philosophy at Tallinn University in 2014. He has published several books in Estonian and has translated Spinoza, Leibniz, Bergson, Deleuze, as well as Chinese authors, such as Zhuangzi. In addition to Tallinn and Tartu, he has studied and done research in Bologna, Paris, Nanjing, Vienna, Taipei, and Xiamen.